According to the U.S. Department of Energy, "compressed air is one of the most expensive sources of energy in an industrial facility. 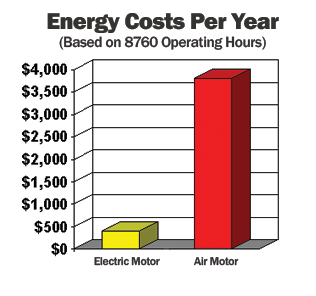 With rising energy costs and heightened environmental awareness, Wastecorp has recently engaged in a study of comparing the relative cost to operate a mechanically driven diaphragm pump and an air operated pump.

Based on an average operating time of 8,760 hours per year, an air driven pump will cost nearly $4000 per year versus $500 for a mechanically operated pump like a Mud Sucker.*

* Costs are based on average electricity costs in major American markets. Figures are in U.S dollars.